Most Haunted Places In India 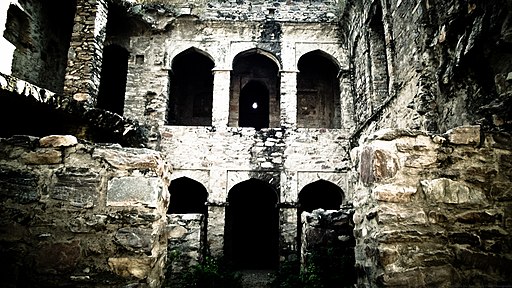 Bhangarh Fort, Alwar - Rajasthan
Eighty-five kilometers from Alwar lies the magnificent remains of the appalling Bhangarh Fort offers best holiday packages in India. Out of seven storeys, the royal palace is now left with only four storeys. The unsolved mystery of Rajasthan's Bhangarh Fort has a magnetic pull to those who want to experience the nerve-racking mystery. As dusk falls, people refrain from this ghostly fort, paying heed to the guidelines issued by the Archaeological Survey of India (ASI). Although, day time doesn't witness any rendezvous with assumed white saree clad figure, the air is filled with queer and inexplicable vibe. The rooms in the palace are dark and dingy with bats and mysterious blow of air.

Dumas Beach, Surat - Gujarat
Nineteen kilometers from the city, the urban Dumas beach along the Arabian Sea is known for its paranormal activities late night. Enjoy the best holiday package at Dumas beach, one of the most crowded beaches where one can enjoy snacking on fried food, horse and camel rides, long walks, etc. The place is a complete black out after sunsets. It exudes a creepy feel. It is believed that silent whispers are heard and pat on the back are felt. The beach was a cremation ground for the Hindus. The ashes of the dead have blended with the sand.

Aleya Ghost Lights - West Bengal
Your best holiday packages in India must include Sunderban of West Bengal but don't overlook the Aleya Ghost Lights at night. The edges of the rivers dominated by grasses or reeds of West Bengal have witnessed bewildering glaring bright light floating around. Risk takers can wait till dark to be a spectator of Aleya Ghost lights that have baffled the onlookers. It's always better to remain safe, timid and coward than to plunge into the depth of the swamp by following the Aleya ghost light. The marshy and swampy areas of West Bengal are eerie and freaky. The villagers tell the tale of the flickering light to be the ghost of a dead fisherman. They believe that those who follow this mysterious light meet with death.

Jamali Kamali Tomb, Mehrauli – New Delhi
Located in the Archaeological Village complex in Mehrauli, New Delhi, the Jamali Kamali Tomb gives the passer by a hair rising chills. The mosque and tomb was constructed in 1528-29 and the Sufi saint Shaikh Jamali was buried here in 1535. Restless spirits have said to haunt the tomb since long. There have been incidents of witnessing faint light in dark, sounds of scream and angry slaps by unknown force.

You have got to be a daredevil if you want to experience the best holiday packages in India.