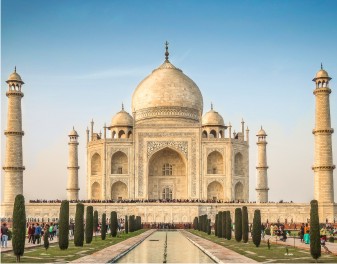 The three names in North India, Delhi, Agra and Jaipur are the most recognized cities which are decorated with the jewels of ancient India. India is a proud country to be the land of brave rulers and their heroic tales. The great saga of the tales is reserved in monuments, forts and palaces. The 4 nights 5 days Golden Triangle Tour is giving you a splendid journey of the decorated land of heroes and their architecture.

Delhi the capital city is the heart throb of the country, attracting travelers from all across the globe. Qutub Minar, Red Fort and Chandini Chowk speak about the royal time of Delhi when it was ruled by Mughal ruler and their love for arts and architecture. Moving to Agra, it is the land of romantic couples and the destination of love. The white marble architecture has made the entire world to admire its beauty and gathered people to spread an entirely pure meaning of love and dedication. The poetic lines give Taj Mahal a tribute to the love of emperor Shah Jahan and his wife. The last destination Jaipur is known and recognized as Pink City which is the royal Rajputana land. The bravery tales, folk dance music, and forts and palaces are the major attractions of the city.

Five days Golden Triangle tour package takes you to a merry go round trip to three famous places in Northern India and gives you a superb experience of visiting. The journey takes you to multicultural city Delhi with the most memorable and significant city Agra and later to the royal pink city Jaipur.

Later you will be taken for a tour to New Delhi planned by Sir Edwin Lutyens. Visit the Humayun’s Tomb, memorial of Mughal Emperor Humayun, built in 16th century & renowned as World Heritage Site.  Our next attraction will be Qutub Minar, the tallest minaret of world & a perfect example of Indo-Islamic architecture & listed in UNESCO’s world heritage site.

Further in time drive to Agra, the home of Taj. Upon arrival check in at hotel & stay overnight.

At sunrise visit the Taj Mahal (Closed on Friday) one of the seven wonders of the world. Built by Mughal Emperor Shah Jahan is a perfect example of most extravagant love.

After breakfast check out from hotel & opt for sightseeing of Agra Fort, the majestic fort of red sandstone stands on the banks of river Yamuna. By the time drive to Jaipur stopping at Abhaneri step well. Later drive straight to Jaipur. Upon arrival check in at hotel and stay overnight.

Today morning after leisurely breakfast check out from hotel & drive to Delhi International Airport to board flight for onward journey.