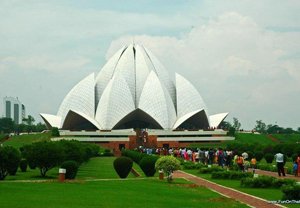 Capital of India & a bustling international metropolis is one of the oldest city in the world. Blend of glorious past, historical treasures & colorful markets. Delhi is a mixture of two cities Old & New Delhi. Old city is a rich amalgam of Mughal Ambitions & New Delhi is splendent with the creations of Edwin Lutyens & The British Raj.

Start in the morning with Raj Ghat (Mahatma Gandhi’s creamtion site), followed by Jama Masjid, a huge mosque built in red sandstone & a must visit in Old Delhi.

Next to Chandni Chowk, the noisy & oldest market in India. From here we take a rickshaw ride to Red Fort, another red sandstone building & was residence for many Mughal Emperors.

Move on to New Delhi, begin with Qutub Minar. Built in 1192 the complex has a iron pillar which has stood from thousands of year without rusting. Later proceed for Humayun Tomb, Rashtrapati Bhawan & finish with India Gate.