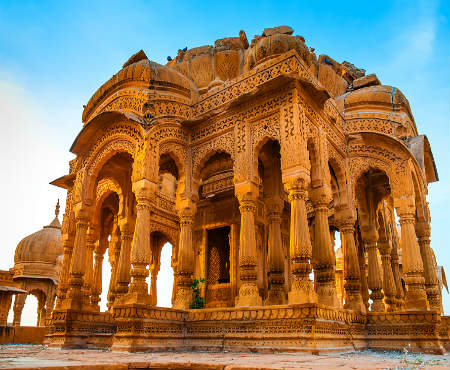 With a 12 nights/13 days trail find your way through the glitter of narrow by-lanes of old bazaars of Delhi or stroll through the sprawling Lutyens of the contemporary Delhi. Get the guided tour of the city of Agra and its forts on the banks of river Yamuna. Overwhelm your senses with the typical Rajasthani royalty and aesthetics at Jaipur and head towards the only temple of its kind in India- Brahma temple in Pushkar. Indulge yourself in the rustic charm of Nimaj and its villages and enjoy a jeep safari or a camel ride through the tranquil Marwar. Celebrate the tribal and rural grandeur of its villages. Visit the undulating forts of Jaisalmer to witness the perfection of Rajputana and plunge into the radiance of Jodhpur and Udaipur from its romantic lakes to its imposing forts.

Post lunch you will be taken for a tour to New Delhi planned by Sir Edwin Lutyens. Visit the Humayun’s Tomb; memorial of Mughal Emperor Humayun built in 16th century & renowned as World Heritage Site. Our next attraction will be Qutub Minar, the tallest minaret of world & a perfect example of Indo-Islamic architecture & listed in UNESCO’s world heritage site.

Also drive by the India Gate & President House, the official residence of President of India. Overnight at hotel.

After a leisurely breakfast lead to Agra.The home of Taj. Upon arrival check in at hotel.

Later in the afternoon take a guided tour to the visit of Agra Fort, the majestic fort of red sandstone stands on the banks of river Yamuna. Evening free to explore the local streets.Overnight at hotel.

Today early morning at sunrise visit the magnificent TAJ MAHAL, one of the seven wonders of the world. Built by Mughal Emperor Shah Jahan is a perfect example of most extravagant love. Return to the hotel. After leisurely breakfast check out from the hotel and drive to Jaipur via visiting Abhaneri step well. Upon arrival check in to the hotel and stay overnight at hotel in Jaipur.

Come back to the city & visit the City Palace, a perfection of Rajput architecture, Palace of Winds popular as Hawa Mahal, a five storied building built in 1799 to enable the royal ladies to view the outside life & world.

This morning start for Nimaj in the morning enroute visiting Pushkar, very important pilgrimage town of Hindu Devotees. Visit the Brahma Temple, said to be the only temple of Lord Brahma in world & Pushkar Lake.

Later head to Nimaj a rustic charming village located near to Jodhpur. Upon arrival check in to the fort converted hotel & stay overnight.

Enjoy the Jeep Safari in nearby villages, visit the temple of Goddess Durga. Later drive to Manvar, lying between Jaisalmer & Jodhpur, a place located away from hustle & bustle. On arrival in Manvar check in at resort. Take a camel ride in the evening & unwind yourself in dunes with cultural evening & dinner. Overnight at resort.

After a hearty breakfast check out from resort & drive to Jaisalmer in the heart of Thar “The Great Indian Desert“. Upon arrival check in at hotel & relax. Overnight at hotel.

Start your day with sightseeing of Jaisalmer Fort, built on the top of the hill. Made of sand stones & famous as Sonar Quilla, excellent example of Rajput architecture. Visit the Gadisar Lake & several sculptured havelis (mansions) of merchants.

Later in the afternoon drive to Sam (40 kms from Jaisalmer). Enjoy the sunset camel ride through the sand dunes & dinner. Overnight at hotel.

After breakfast leave to Jodhpur at the edge of Desert was once the capital of strong & powerful kingdom Marwar, also called as Blue City of India. Upon arrival check in at hotel.

After freshen up plunge yourself into the magnificent heritage of Royal City. Visit the Mehrangarh Fort, most imposing fort of India & houses of excellent museum. Visit Jaswant Thada – A cenotaph of the rulers of Jodhpur built in lucid white marble & Umaid Bhawan Palace. Overnight at hotel.

Start for Udaipur after breakfast, enroute stopping at Ranakpur temples, famous for intricate sculpture. The 1444 pillars support the 29 halls of temple, none of which are similar.

Ahead straight to Udaipur, a romantic city of Rajasthan also familiar as Lake City. Upon arrival check in at hotel & stay overnight.

Morning after breakfast left yourself in depth of charm. Start your tour to visit the City Palace, built by Maharana Udai Singh on the bank of Pichola Lake, Jagdish Temple, Sahelion-ki-Bari (Gardens of the maids of Honor)

Later in the evening enjoy boat cruise on Lake Pichola. After a busy day come back to your hotel & rejuvenate yourself. Stay overnight at hotel.

Itinerary stands on last day. After leisurely breakfast at appropriate time check out from hotel & transferred to Udaipur Airport to catch flight for onward destination.