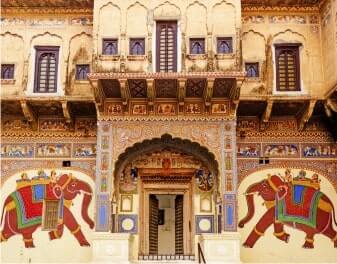 Rajasthan the 'Land of Kings' is a perfect destination to give you an Incredible Rajasthan tour. This Rajasthan tour package of 10 days gives you a treat to enjoy the Royal saga and tales in the heritage forts and palaces and chosen destinations like Jaipur, Jodhpur, Udaipur and Pushkar of this State. 10 days in Rajasthan is surely a complete package to understand the rich culture, heritage beauty and royal traditions of one and only Princely States to explore closely the grand attractions.

09 nights 10 days Rajasthan itinerary gives you a start from the capital city of India and then takes to an amazing tour to world class hospitality destination 'Rajasthan'. Travel back into the Mughal era and meet their imagination and architectural skill best example in Old Delhi and New Delhi with new attractions. Prepare yourself to travel back into the Rajput royal era once you over Mughal era. Your Rajasthan tour plan will go through some of the chosen destinations; Jaipur, Jodhpur, Udaipur, and Pushkar.

Take a rickshaw ride in narrow lanes of Chandni Chowk, old bazaar of Delhi. From here we ahead to drive by Red Fort.

Post lunch you will be taken for a tour to New Delhi planned by Sir Edwin Lutyens. Visit the Humayun’s Tomb, memorial of Mughal Emperor Humayun, built in 16th century & renowned as World Heritage Site.  Our next attraction will be Qutub Minar, the tallest minaret of world & a perfect example of Indo-Islamic architecture & listed in UNESCO’s world heritage site.

After a leisurely breakfast lead to Agra. The home of Taj. Upon arrival check in at hotel.

Later in the afternoon take a guided tour to the visit of Agra Fort, the majestic fort of red sandstone stands on the banks of river Yamuna.

Evening free to explore the local streets. Overnight at hotel.

Morning check out from hotel & drive to Jaipur on the way visiting Abhaneri step well. Later drive straight to Jaipur. Upon arrival check in to the hotel. Overnight stay at hotel.

After a morning breakfast leave for Jodhpur at the edge of Desert was once the capital of strong & powerful kingdom Marwar, also called as Blue City of India. Upon arrival check in at hotel.

Evening free at leisure to stroll around the local streets of Royal city. Overnight at hotel.

Establish your morning with a guided tour of Jodhpur. Begins with the Mehrangarh Fort, most imposing fort of India & houses of excellent museum. Visit Jaswant Thada – A cenotaph of the rulers of Jodhpur built in lucid white marble & Umaid Bhawan Palace.

Post the sightseeing assignment drive straight to Udaipur, a romantic city of Rajasthan, also familiar as Lake City. Upon arrival check in at hotel & stay overnight.

Morning after breakfast left yourself in depth of charm. Start your tour to visit the City Palace, built by Maharana Udai Singh on the bank of Pichola Lake, Jagdish Temple, Sahelion-ki-Bari (Gardens of the maids of Honor)

Later in the evening enjoy boat cruise on Lake Pichola. After a busy day come back to your hotel & rejuvenate yourself. Overnight at hotel.

Leave to Pushkar, a very famous religious hindu centre & houses of various sacred temples. Upon arrival check in at hotel.

In the afternoon take a sightseeing tour of Pushkar. We will visit the Brahma Temple (said to be the one & only temple of Lord Brahma in world) & other various temples.

Later visit the Dargah of Khwaja Moinuddin Chisti in Ajmer , a world wide popular pilgrimage centre which attracts a large number of pilgrims every year.Overnight at hotel.

With the fragrance of soil its time to say good bye. Leave for Delhi & transfer to Delhi International Airport for onward journey.