Gagron Fort is the epitome of chastity because of 2 live burnings carried out by queens to protect their honor. This fort is well known for its remarkable foundation less construction that takes support from the hills of Burj. 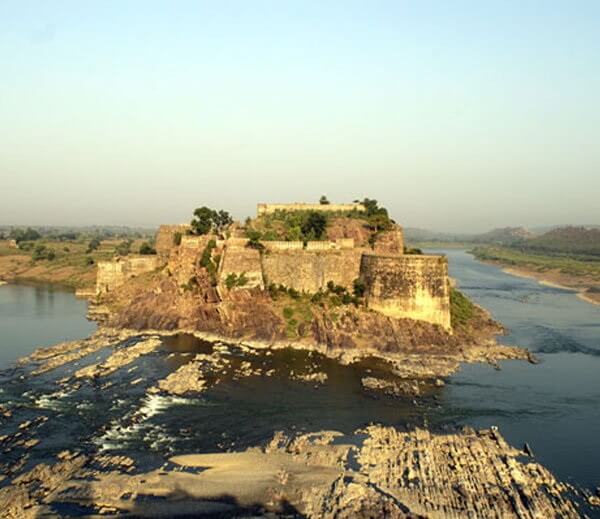 Proudly holding the award of being a “world heritage site”, Gagron fort is located in the Jhalwad district of Kota, Rajasthan. As all know, Rajasthan is the only state in India articulated with forts somewhere or the other. No matter where a traveler goes in this royal state, a fort is always there to welcome him. Indeed, it is the only fort in India that does not have any kind of foundation.

This beautiful fort of Gagron is known for its legends, which states that when the ruler of this place, Achal Das Khinchi lost the battle to the ruler of Malwa, Hoshang Shah the Rajput women performed jauhar (burnt themselves alive) in the wake of protecting their chastity from enemies. Hundreds of women embraced death.

Only Fort having three courtyards
The construction of this remarkable fort was initiated by Raja Bijal Dev in 12th century and was ruled by Khinchi Dynasty for about 300 years. This fort has been witness to 14 battles and 2 live burning procedures (jauhar) of queens. An excellent thing about the fort is that it is the only fort of North India which is surrounded by water and has been named as Water Fort of India. This is the only fort with three courtyards, normally forts have two courtyards. It does not have any foundation; the support is taken from the Burj.

Why thousands of women did performed jauhar…?
The last ruler of this fort was king Achal Das Khinchi. In medieval period the growing Muslim power in Malwa eyed on the richness of Gagron fort. Sultan Hoshang Shah of Mandu attacked the fort with 30 thousand horsemen, 84 elephant riders and a massive army in 1423. When king Achal Das Khinchi realized his defeat in front of much bigger army and high grade weapons then instead of surrendering cowardly he fought with valor and lost his life in the battle according to Rajput tradition. Thousands of women gave their lives to protect their virtue from foes.

Why Achal Das’s bed was untouched?
After Muslim won over the fort they were so much mesmerized by Achal Das’s bravery that they didn’t touched residence and memorabilia of the king. Hundreds of years the fort was under Muslims but no one dared to destroy or remove his bed from the bedroom of Achal Das, may be as a matter of fear or respect. The bed remained there till 1950.

Sounds of the king’s sleeping and hookah smoking heard for several days
It is believed that the king used to sleep on his bed every night. Some people had also heard gargles of Hukka coming from the room.

Parrots of fort are unique
Parrots of Gagron are very famous. They are double the size of normal ones and are darker green colored with red specks on wings. Male parrot bears red and black bands around neck. It is famed that the Hiraman parrots born in Ram Burj of Gagron are very skilled in speaking.

Everyday five rupees was found next to bed
A barber from the state used to clean and arrange bed every evening and he get 5 rupees subsequent morning next to the bed. One day the barber anonymously told this to someone and from that day onwards no money was found but the tradition of bedding continued in Kota estate, until its dissolution into Rajasthan.

Parrots speaks like human
The parrots in fort exactly copies human voice. Bahadur Shah of Gujarat won this fort from Mewar’s Maharana Vikramaditya in 1532. He always kept a Gagron parrot with him. Later, when Humayun won over Bahadur Shah he got this parrot who speaks in human voice locked up in a gold cage, along with other things seized. Humayun was in Mandsor at that time and ordered to kill that parrot on betrayal of a Commander.

Thieves left khanda in mid way
An ADC stole heavy sword of Khinchi king. But those who stole weighty khanda were unable to carry it far and left it mid way. Now it is in Jhalawar jail. Centuries old bed and beddings of Khinchi King have now disappeared. Cannons were melted.

Akbar made it his headquarter
Importance of Gagron in medieval era is measured by the fact that both Sher Shah and Akbar personally won over it and included in their kingdom. Akbar made the fort his headquarter and in the end gifted it to Bikaner’s Prithviraj who was one of his Navratans.

Excellent picnic spot
The fort standing at the juncture of Kalisindh and Ahu rivers is surrounded by greenery that is why it is center of attraction for tourists. Bird’s eye view of Gagron Fort from Pipadhaam is alluring. It is a nice picnic spot for locals too.

Used for Death Sentence
The fort has two entrance gate; one opens on river side and the other towards rocky pathway. According to Historians, the construction started in 7th century and continued until 14th century. This fort was used for giving death sentence to enemies.

Earned fame in world
UNESCO has included this marvellous heritage in its list of World Heritage Sites. Other than this state’s five more hill forts are also included, namely, Amer Palace, Kumbhalgarh, Jaisalmer, Ranthambore and Chittor. Now eight heritages of Rajasthan came on world map. Ghana Bird Sanctuary of Bharatpur and Jaipur’s Jantar Mantar are on top of the list.

Historic Gagron fort is pride of India. It is a legendary water fort standing firm boasting of its robustness in spite of being governed by many rules. The fort is perfect destination for historians as well as those who appreciate art and architecture.