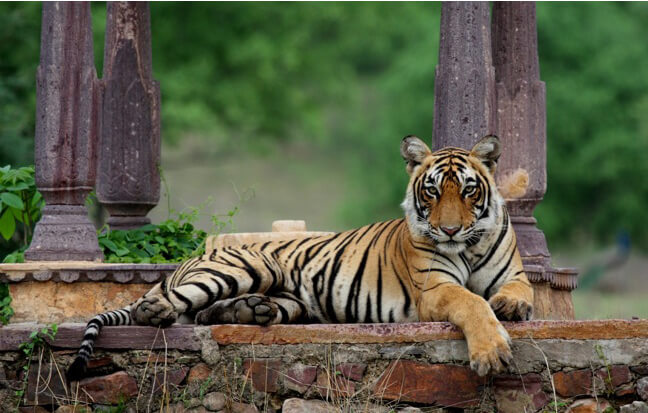 'The tiger sprawl over deer and finally they will have feast today', this audio when we watch with video on wildlife channel gives us goose bumps. The wildlife channels give us videos and short clips collected from the top forests and make a documentary on the wildlife and chosen wild animals. So, here the tiger land 'Ranthambore' gives you a chance to come out of your television screen and walk on the dusty path of Ranthambore forest which is widely known as 'Ranthambore National Park'.

The 'Ranthambore National park' is located in Ranthambore near to Agra and also Jaipur lies in the Rajasthan State. Talking about Rajasthan it means that you are stepping on the heroic land which has lots of stories about great Rajputana ruler and now coming to Agra, it is recognized as a Mughal land. Ranthambore, as being in Rajasthan and very close to Agra was once used to be the hunting ground of Rajput royals and Royal Mughals. In India, Ranthambore National Park is observed as heritage park by UNESCO and has maximum tigers, which gives a high chance for the travelers to spot them wandering in their home land.

Ranthambore music festival 2020, is an upcoming event in Ranthambore which is organized for three days and is now turning a buzz attraction for the wildlife and music lovers. India is a mythological country, is now representing a cultural event in the middle of the forest in Nahargarh fort in the forest as a stage to gather Sufi musicians and top singers from India. The motto of this celebration of the festival is to give you a chance to explore Ranthambore forest more closely and explore the beautiful life of wild animals through documentary as well safari.

Nahargarh fort of Ranthambore is one of the oldest forts in Rajasthan, which was actually built by the Rajput exclusively for hunting. At the earlier time, hunting was one of the major expedition which was mostly done by Royal Rajput. They used to go on hunting for several days and stay in Nahargarh Fort.

Highlights of the music festival-

January is the proposed date to plan your fair and festival tour in Ranthambore. Here are some highlights of the Ranthambore music festival-

Those travelers interested in wildlife expedition and want to enjoy Indian music and Sufi music must plan for the Ranthambore music festival 2020, which is going to give you many experienced and colors of Rajasthan. The heritage forest, fort, wild animals, top singers, local cuisine, yoga and screening over the wild animals are more than enough to enjoy Ranthambore trip closely with fun, adventure and excitement.